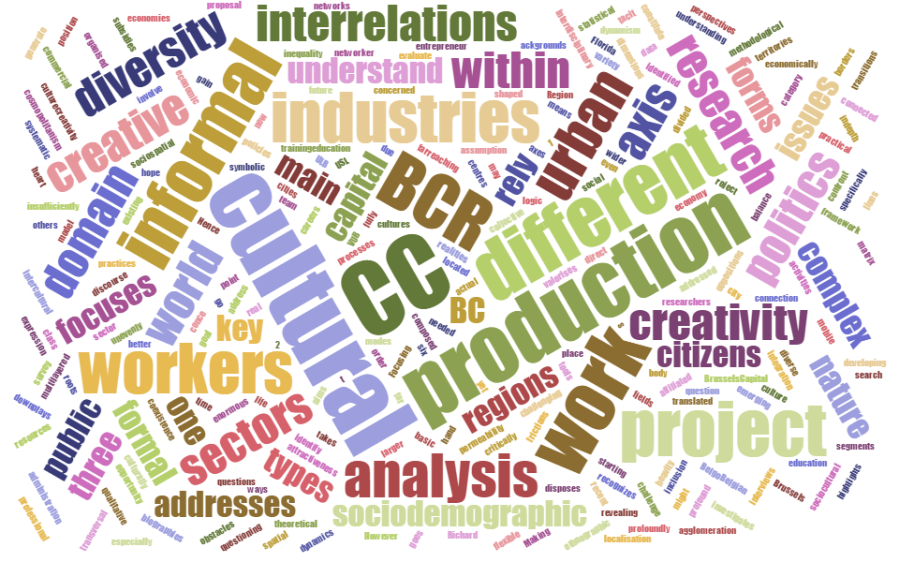 The research project The Diversity of Work in the Creative and Cultural Industries: Making it Work for Brussels aims to understand, by means of a multi-layered matrix of theoretical and methodological perspectives, the interrelations between creative and cultural (CC) careers (both formal and informal), fields of activities or sectors and their socio-spatial logic within the larger framework of the Brussels-Capital Region (BCR). More specifically, the main goal of this collective research project is to gain a more profound understanding of the world of CC production (work and workers) and its different segments: cultural and socio-cultural organizations and institutions, cultural industries, training/education and different types of informal creativity. Focusing on the complex yet challenging interrelations between work, culture/creativity and urban processes, an interdisciplinary composed team of researchers affiliated to six different research centres located at ULB, USL and VUB will address the different modes of co-existence (permeability, frictions and even oppositions) of these different types of cultural production.

The project takes as its starting point a basic but far-reaching assumption: the BCR disposes of an enormous CC capital (of both real and symbolic nature) due to its complex intercultural socio-demographic nature but this capital is unevenly or insufficiently addressed and translated into actual practices and policies. Hence, this project fully addresses the economic and cultural dualisation within the BCR in order to identify the tools needed for a more systematic connection between the world of CC production and the socio-demographic realities of the BC . As such this project addresses the key issues as far as the BC ’s future is concerned: (1) the integration of cultural dimensions in questions of urban development and (2) the search for a new balance between a politics of attractiveness that valorises the region’s CC industries and a politics of inclusion that recognizes the region’s cultural diversity and the emerging, informal and urban cultures that go with it.

Through the analysis of the interrelations between cultural production in all its different forms on the one hand and urban politics on the other, this project will critically evaluate one of the key issues in the recent discourse on cities and cultural economy: the concept of creativity and the category of ‘creative class’ that goes with it. More and more BCR citizens with roots in other backgrounds than the ‘Belgo-Belgian’ culture challenge the existing culturally and economically divided dualisation of the city by developing different forms of informal creativity, while at the same time revealing that this model of the mobile and flexible entrepreneur and networker identified by Richard Florida and others downplays question of social inequality. However, the cultural dynamism of this diverse body of BCR citizens might constitute the very heart of CC life in the BCR and may be the most direct expression of its cosmopolitanism.

Our proposal focuses on three main axes of analysis that each involve a variety of methods (statistical data analysis and survey, ethnographic methods, qualitative in-depth interviews) and lines of questioning:

This project will generate practical knowledge in at least three areas: knowledge on the construction of quantitative datasets, indicator development and measurement techniques with particular attention paid to the relative strengths and limits of available datasets in the domain of cultural production; situated knowledge on and insight into the diversity of work and workers in this domain; awareness of the impact of contextual factors on the work and workers within this domain.